The Pacific is a ten episode mini-series that aired on HBO in 2010 and is actually produced by Steven Spielberg and Tom Hanks among many others. It happens to be the second war series from the same creators, first being “Band of Brothers” which I still haven’t finished watching. Both are great, high scores and great reviews not to mention the long list of awards both of them received. Also a Golden Globe for Band of Brothers for the Best Mini-Series or Motion Picture made for TV. The Pacific got the same nomination but lost it to Carlos. In that sense one might say that Band of Brothers is a bit better, maybe because watching the English actor Damian Lewis play an American soldier and doing it with such perfection that not even an American could do it better is impressive. But more about Band of Brothers when I finish it.

I have to admit, I like war-series and movies a lot. At times they are very hard to follow because it can go from really quiet to really hectic in just a second but it means that they keep it real. The Pacific had couple of moments when I was completely lost for minutes because it was dark, it was raining and I couldn’t understand which were the good guys. Pretty difficult was to remember the names as well even though I watched it in two days but all this aside I enjoyed it because I got emotional very many times. The moments of so called personal life inside the cruel war were heartwarming. For those who don’t know, The Pacific is actually based on two memoirs and in the beginning of each episode veterans of that war talked about the war and specific battles. Some of them made me really teary-eyed because I had the knowledge of them loosing their friends and fellow men in the war on my mind the entire time. And some of them said things that just got me, like how they were lucky and others were not – so sad to look at old men remembering the horrid times and still being surprised by the fact that they survived.

Since it is based on two memoirs there are two main stories, actually there are many others but I found two of them more appealing. First one was of Robert Leckie (James Badge Dale) who wrote while on war and who was an interesting character. He was so serious at times, then he was happy and running after a lovely woman and then depressed again etc. Besides that the acting was superb, James Badge Dale had these looks that said so much and he didn’t even have to say anything. He was more of an observer when the new characters entered among who was Eugene Sledge (Joseph Mazzello), the main character of the second story  and in focus, his friendships with two men – Sidney Phillips (Ashton Holmes) and Merriell “Snafu” Shelton (Rami Malek). At the beginning we see Sledge not being able to go to war and he is sending his friend Phillips off, they meet couple of times but they aren’t in the same unit. So the end had more Sledge and especially interesting was to look at him and Snafu. They were so different yet so similar and if you make it to those “what happened to them” credits in the end you’ll find out that Sledge and Snafu didn’t talk after the war for many many many years.

It is a very complex mini-series and it makes you think. I am sure I will probably watch it again some time in the future because I am sure I missed something and I will maybe understand it differently the second time around. One other thing I want to do is to read those books if I get the chance.Therefore I would recommend it highly but I also have to point out that you have to be fully invested in it, you can’t multitask like I usually like to do – this case I wasn’t doing anything else while watching and I STILL had trouble following the fast battle moments.

#1: Just remembered the scene were Eugene is running over the empty field towards a house and men around him get shot. He is carrying in the weapon and I kept thinking that it is luck that keeps him alive because there is no logic in that moment. They run towards death or life, many of them die, many get injured and it is just horrifying to look at that scene.

#2: The opening titles of the series is very thrilling and the music is done my Hans Zimmer which sets the mood perfectly. But I got tired of looking at it since I was watching the episodes in a row and the title credits are really long! Added the image of the title in the beginning, the black chalk actually represents Leckie because he wrote with it in his books

While hopefully watching The Pacific or waiting for the Band of Brothers review, let me know what is your favorite war series or movie down in the comments. 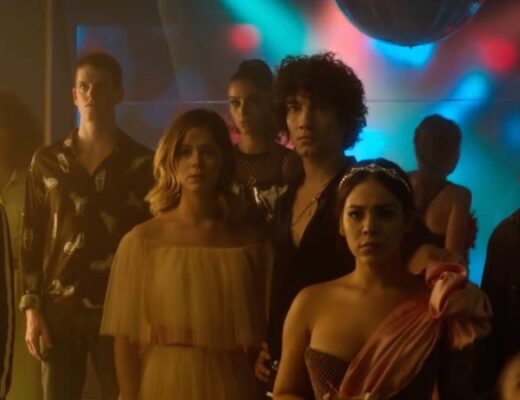 Elite Season 3 & What to Expect Next

10 Things That Really Annoy Me