Let me just sit here and contemplate on how wonderfully insightful a movie about aliens could be. How it could ask difficult questions, how it can educate and teach us about the importance of language and science without making it too futuristic. Let me just sit here for a moment before I manage to put Arrival into words that would perfectly reflect my state of awe.

I hereby advice to read with caution, as this review contains spoilers and minor hints, which you would want to avoid until seeing the movie yourself. Trust me, it’s far more rewarding to go in with almost no knowledge.

It was not too long ago since I saw Enemy (2013), a movie that similar to Arrival asks very difficult questions and most importantly, tries to understand the human nature. It was a little over a year ago since I saw Sicario (2015), a movie that asked the question about right and wrong, and threw our protagonist into a very complicated situation. And it has now been less than a day since I saw Arrival, a movie that on its surface is about an alien invasion, but in its core, is about a question that we are too afraid to ask. All these movies focus heavily on the actions and thoughts of humans, specifically our protagonists, and all are directed by the brilliant Denis Villeneuve.

Dr. Louise Banks (Amy Adams), a linguistics professor, is having a typical morning, she goes to work, and is ready to teach her class when news of the landing of 12 shells around the world breaks. She goes home, turns on the news, and watches with the world and waits for the inevitable. The next day arrives, and unlike everyone else, Dr. Banks goes to work, just like she normally does, to an empty classroom. Then Colonel Weber (Forest Whitaker) arrives, plays an audio track of the aliens communicating, and asks if she is able to translate their language. Despite being a little rattled, Dr. Banks explains that she needs to be present in order to translate their language, which Weber is not too happy about. But as he realizes that Banks is the best in her field, she is taken to the US shell landing sight in Montana, together with a scientist named Ian Donnelly (Jeremy Renner), to lead two sets of teams in order to find answers.

Then the brilliance commences. We witness a slow paced linguistically driven plot, that asks all the right questions at the right time. And what Arrival does for the alien genre is amazing to witness, it adds depth and sophistication, when so many alien invasion movies sacrifice seriousness for the entertainment factor. With Arrival, not only do we get to see the process of starting a communication between humans and the alien race, but we also get to see small glimpses of processing new information, new signs, and most importantly, new language. It is beautiful, interesting, captivating and fascinating.

It seems I have used quite many very praising words towards Arrival, and yet, I haven’t even gotten to the actors. No worries, I have a few more up my sleeve. For instance, I would describe Amy Adams’ performance as mesmerizing! She demands attention through vulnerability, she is often seen as at her breaking point, almost close to panicking, yet she continues her work. Similar to Emily Blunt’s performance in Sicario, Adams portrays Banks as a woman, and women are more driven by emotion than facts. For every information Banks receives, she has an emotional reaction, she is processing their language while continually becoming more emotionally invested. Men, as also shown briefly through an act of violence, are more rational throughout this process, making Adams’ performance stand out even more. With the exception of Jeremy Renner’s character Ian Donnelly, who gradually also becomes emotionally invested but for other reasons. 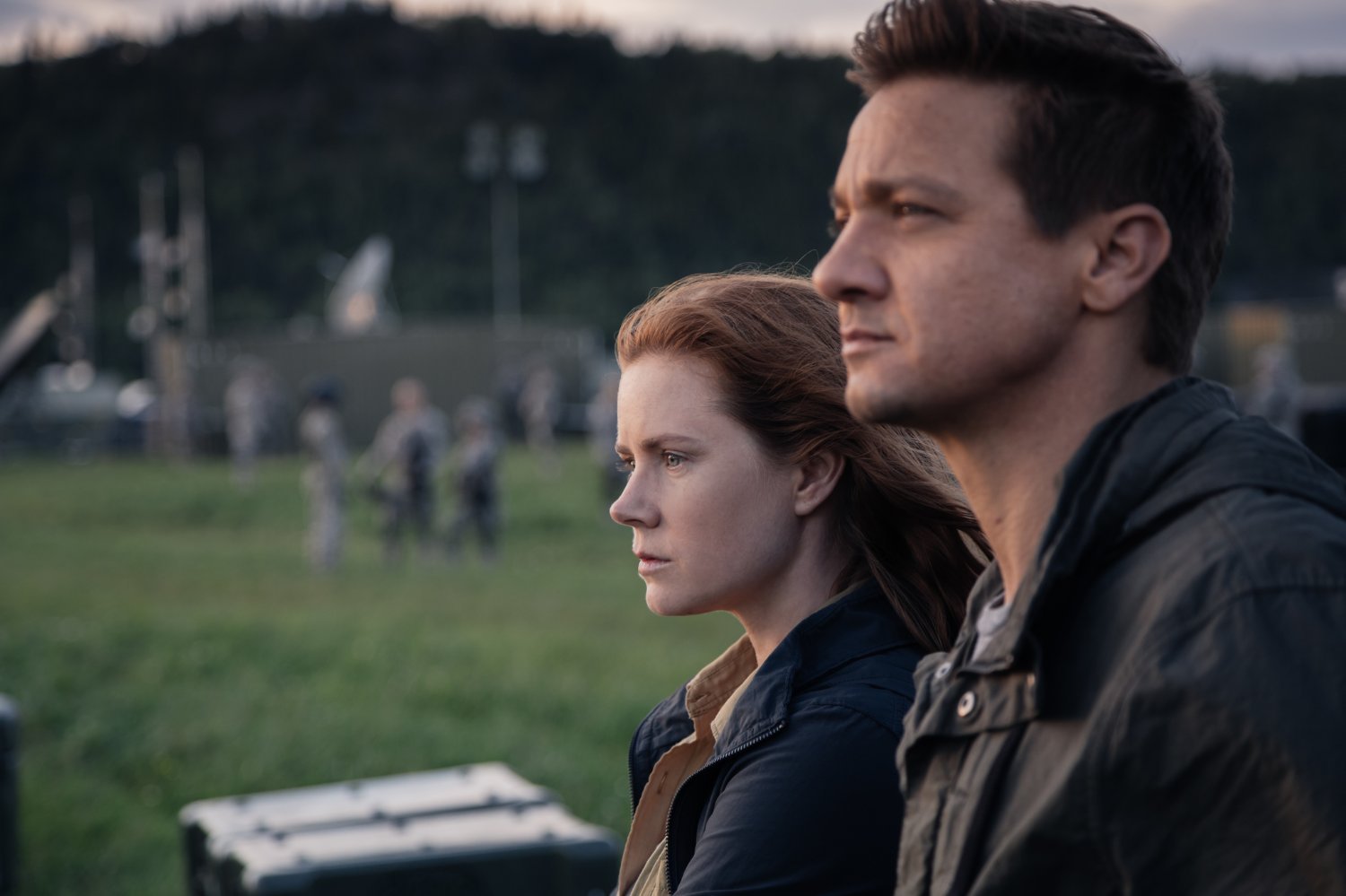 Emotion is a strong descriptive word for Arrival. Granted, every movie is about emotion one way or another, but while Arrival explores the understanding of time, it does so by using strong emotions to explain its hypothesis. I’ll try to explain this through my fairly complicated thought process. First of all, our understanding of time is linear, Arrival proposes an idea that it isn’t, and instead, time is connected to itself in a circular way. And it’s stunning how the movie hints at that idea from the very moment we see the aliens communicate through ink-like substance by making Rorschach type circular symbols. And the emotional question it asks, in the very end of the movie, is whether we would do things the same, even if we would know where we end up? And without Adams, and that small yet significant nuance in the plot, that question would have never been as powerful if it weren’t that emotionally loaded. At the end of the movie, Adams’ character Dr. Banks has to make a decision but by then we have been suggested to understand time differently. And in that moment, it’s emotion that Banks values over time, and she proceeds with her life on that same linear line she had chosen before she found out about her future. Proving that time could actually be non-linear, because we would keep making the same decisions in each non-linear moment, due to emotions. Another element of the movie that really elevated the emotions was the soundtrack. With eerie sounds, possible whale noises, and atmospheric music, Arrival really stands out with its audio presentation. It’s simple, just like the movie is visually stripped back, and it never seems to overshadow the visual aspect of the film. There’s actually a moment in the movie where everything is quiet, I got chills during that moment, I got chills thinking back to that moment – no sound at all is the most beautiful sound of all! Combine that with beautiful cinematography, great direction, and you’ve got yourself an audio-visual experience you wouldn’t want to miss on the big screen. Another interesting aspect to the soundtrack though is the fact that you could not actually tell when a track started or ended. It all sort of wove together as one eerie song behind the movie. And that in turn, brings me to the main point I want to make about Arrival!

Arrival does what so few great movies have done over the years, it tells a seemingly linear story, but later reveals that the beginning is actually the end – making Arrival a non-linear movie. That was a brilliant twist to the movie, it floored me, and for once, I wasn’t anticipating it at all. It surprised me, and I was thrilled to be surprised! It also makes the whole movie a circular concept in itself, the beginning is the end is therefore the beginning. So let me just sit here and contemplate on how wonderfully insightful a movie about aliens could be. How it could ask difficult questions, how it can educate and teach us about the importance of language and science without making it too futuristic. Let me just sit here for a moment before I manage to put Arrival into words that would perfectly reflect my state of awe.