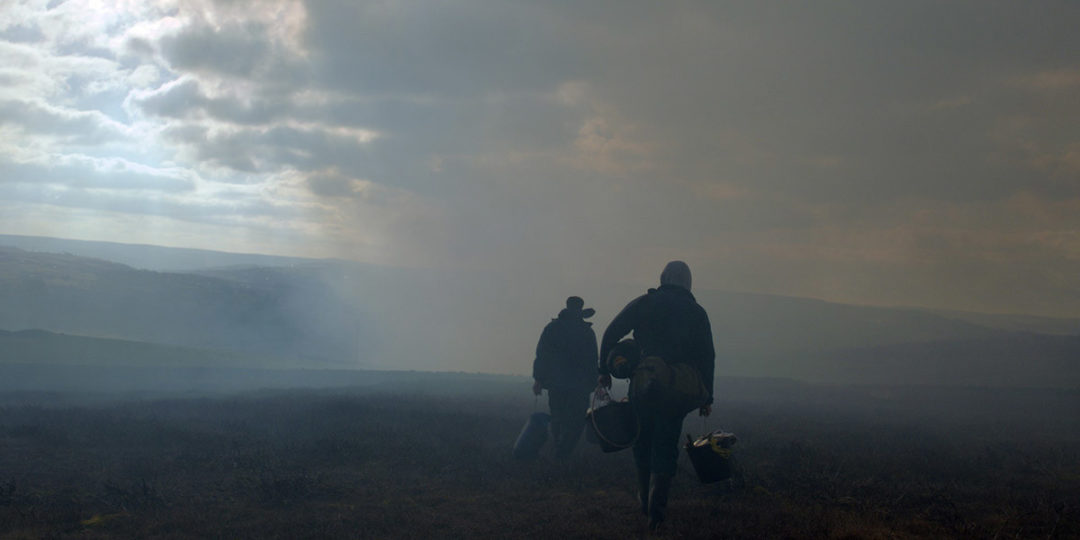 Not often does a film with very little dialog captivate me so much. Even less does a movie manage to do so at 3AM, and keep me awake until the sun comes up. God’s Own Country, which is best described as Call Me Your Name meets Brokeback Mountain, did all that and much more.

Gray, muddy, broody, isolated, bleak, depressing – this is the kind of environment we are introduced in the beginning of God’s Own Country. Johnny (Josh O’Connor), lives with his father and grandmother in a farm, where work never stops. Animals need taken care of, fences built, and after his father’s stroke, Johnny is the one doing all the work. In the evenings he goes to the local pub to get wasted, and wakes up with a hangover and does it all over again.

In the very beginning we are shown that Johnny is also gay. This is never a conversational matter though. His friend visiting from college seems to know, and though both never really mention it, I think his father and grandmother also know. It’s refreshing to see such a silent awareness around him, all while Johnny is closed up, emotionally unavailable and dangerously close to following his fathers footsteps. Holding everything in, letting the stress build up, and endangering his health. Even his encounter with the young man in the beginning of the film is distant. No emotion, just raw physical satisfaction and yet it hardly seems to satisfy him.

In my country, spring is the most beautiful.

Then Gheorghe (Alec Secareanu) answers their ad to help around the farm for a week, and Johnny is taken aback. He is rude and calls him a gypsy. Both men are similar in a way, quiet and mostly keeping to themselves. So when they have to head out further from the farm for a few days, the tension between them starts to build. After name calling Gheorghe gypsy again, Johnny gets tackled down by him and the two men come to a sort of agreement. It’s not soon after that altercation that Johnny decides to act on his raw sexual needs, and Gheorghe reciprocates but completely differently than Johnny is used to.

God’s Own Country is not a movie where a gay man is afraid to admit to his sexuality. It’s a film where a man is afraid to admit he is vulnerable. It’s almost alien for Johnny to admit his feelings, to show his softer side, because his mother left him when he was little. It doesn’t help that his father is also unavailable emotionally. Like father like son. But their strained relationship has nothing to do with Johnny’s sexuality. Which is why I loved this film so much.

The subtle change in Johnny is brilliant to see. Slowly he finds meaning to his life on the farm, thanks to the growing feelings towards Gheorghe. He starts to see the beauty in the bleak and muddy reality of farm life. He watches over land that stretches endlessly next to Gheorghe and smiles, almost as if he hasn’t really looked to see what’s around him. But when his father suffers a second stroke, leaving him less functional than before, Johnny retreats back into his shell.

I don’t want to be a fuck-up anymore.

I have to admit, I peaked to the end of the movie before I even got past the first half. So I guess I ruined the ending for myself but I needed to know where I was heading. Though it came to be after a very stupid act of self-loathing, the end was still beautiful. When Johnny is coming in terms with the fact that his father will never be the same again, he gets drunk and fucks another nameless champ in the toilet. Gheorghe, after being bullied by a stupid bystander, finds out and heads back to the farm just so he could leave. Johnny, confused by this, is faced with a decision.

Part of me understands Johnny well in this situation. He has never felt anything for anyone, and definitely hasn’t thought he deserved to be loved by anyone else. He has probably felt that since his mother left. So when Gheorghe leaves, it takes Johnny a while to realise that he was left not because there was lack of love, but because there was so much of it, it hurt!

While there is so much else to discuss about this beautiful film, I’ll end on this note. God’s Own Country is a simple and stunning film, despite its heavy subject matters and bleak cinematography. It shows us that from horrible things, can come something beautiful. It doesn’t focus on the subject matter of sexuality as much as it focuses on personal growth. It’s about being true to oneself, and most importantly, allowing yourself to love by being loved.