I have no idea how I missed this movie in 2009, it had all the right elements to be on my watching list during that year but maybe it didn’t end up on my screen because I wasn’t blogging at that time… On the other hand, I’m glad I didn’t see it in 2009 because I might have not liked the things I enthusiastically enjoyed while watching Paper Man the other day as much as I would have when I was twenty. Now, as a much wiser and more determined blogger who is not afraid to ignore and go against the big talks around movies, I’m determined to like this movie with at least one thumb up.

The name that pulled me towards the movie from the first place was definitely Emma Stone because I genuinely think she has the most sweetest presence. A friend of mine questioned my taste in the matter by saying she is not the best actress which is true, but like with so many other A-category actresses, I like her because she seems to be real and sometimes that tops an Oscar worthy performance. That is why I enjoyed her in Paper Man which actually showed her less comedic side with her character Abby who had a pretty dramatic back story.

As far as stories go, the whole plot of Paper Man is one far from the ordinary by having Ryan Reynolds as the imaginary Captain Excellent with blond hair and yellow underpants over a tight blue spandex. His appearances were limited enough for me and it seemed he was channeling his previous role as Berg from Two Guys, a Girl and a Pizza Place so there was a certain nostalgia together with his odd costume. Not much of a Reynolds fan but I must say, the over the top character that happened to be imagined by a child suits him perfectly.

So as all the main roles came together with a certain low-key compatibility and comedic appeal, the movie progressed into a more serious topic. A light beginning, a rough middle and a sad ending is how it all went down and for me especially, it all kind of fell apart in the end as I started to cry. Yes, I cried over a comedy/drama, it happens, okay! And the reason I’m confessing this embarrassment is because when a movie emotionally gets to you, you instantly like it. Therefore I liked Paper Man, it caught me on a bad day and got to me with its last big speech like it was probably intended to get people, and now I just like the movie.

To limit the confusion, even without the emotion I happened to let out during the final scenes, Paper Man is still worth the time. It’s not the best indie film out there, the plot kind of misses the bullseye and the whole imaginary friend thing is a little more disturbing than funny but I loved the bits where Richard sat down and tried to write. And the look he gave to his wife (played by Lisa Kudrow) when she asked him how it was going was spot on! Those small moments of acting and that final monologue/letter talking about friendship – I’m telling you, Paper Man came along at the right time on a bad day and crushed me in a good way. 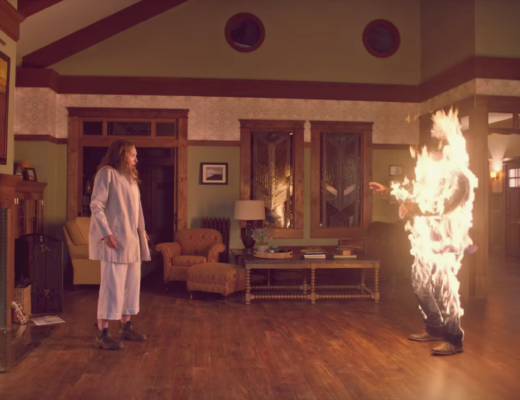