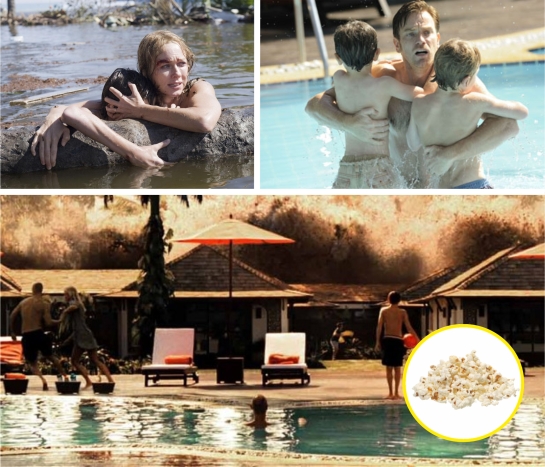 This post contains spoilers but in order to keep you from them I wrote this sentence.

The Impossible is a perfect example of a movie that has a big impact with its realistic take on the disaster that shocked the world. I’m not going to lie, there are moments in the movie that will be in my mind for a long time because of its cringe worthy showcase of battle wounds and emotions. Now, weeks later, after I thought my emotions had gone away, I re-watched some scenes and all of those emotions came rushing back. You simply can’t forget The Impossible because it thrives on the one thing that we all can relate to: survival.

When it comes to The Impossible, there are some things I loved and some things I liked. There were these moments of utter shock in the beginning that set the bar high for the second half of the film, a part that in comparison didn’t start off as strong.That being said, thinking back to the whole story, the plot arrangement did feel a bit off – whilst two stories needed to be told, I felt a bit cut off when the first storyline ended and the second begun. That feeling didn’t last long though because The Impossible has a lot of emotions running through its surface as well as its core – it’s hard not to connect and hope together with the characters as they search for answers.

The first half, the part of the movie I absolutely loved, was focusing on the mother Maria (Naomi Watts) and her son Lucas (Tom Holland). Both performances were out of this world! I know that Watts got a nomination for this but man, Holland was just as good. Maybe it was because of Watts that he stood out so much, or maybe it was their mutual connection that shined through so bright – whatever it was, it worked tremendously well. The fact that Watts and Holland managed to give phenomenal performances was partly the reason why the second half of the movie didn’t have as big of an impact on me. It was good but compared to the impact the mother and son storyline had, it was weaker and slowed down the plot a bit.

Still, the focus on the father Henry (Ewan McGregor), and other sons (two very cute sons) was a different kind of story. While the first was more focusing on the survival instinct, the second half of the movie could be described by hope. McGregor’s character was not giving up on his family, certain his wife and son were out there, he left his younger sons behind in order to do his best to reunite the entire family. Without certain proof, he kept looking and I have to be honest, at some points I was a bit disconnected from his character. Even though McGregor is a brilliant actor, the fact that the father left behind his sons was something I didn’t understand. Still, it served as a great way to bring on screen one of my favorite scenes of the movie I’ll share with you guys in the end of the post.

Before I get to that, The Impossible’s strength, like I mentioned, is in its first half. The beginning is all about the mother and son surviving the first wave and being washed out to god knows where. They struggle to come together in the river of objects floating around and luckily they finally are finally able to reunite. When they manage to get themselves on ground, we realize what she had really gone through – she looks awful. That scene made me cringe, just thinking about it makes me cringe, Holland held his own right there and I knew he will be brilliant throughout the movie. Holland portrayed Lucas with such a grown-up manner that it made me wonder if the real-life kid in that situation did the same because if he did, wow.

Whilst a lot of the struggle for Holland’s character is getting his mom help, a lot happens with him in the hospital, where he also helps other people – or at least tries to help them. That scene represents the chaos, the lost family members, the missing people, the fear of losing one another and the happiness of reuniting with loved ones. Since the movie is based on real life, I trust that those events took place and that makes me happy. And with that the second half begins with the focus on the father trying to do the vary same his son is doing for others – reuniting a family. As McGregor does what he does the best, which is, simply put, portray a character as best as the character could be portrayed, the two youngest sons also steal the screen. I don’t know what is it with children but they seem to be scary talented and even in such an emotion filled movie as The Impossible.

Eventually, as such in reality, the family becomes a whole again and it is emotion after emotion when everybody finally gets together. All ends well for the family and when we finally think we’d seen it all, the  movie throws us the scene that will make everything else we saw look like a walk in the park. Still as clear as the day I saw it, the scene of the mother going through the class wall and literally fighting for each breath as her body was thrown around in the water as if it was nothing is imbedded into my brain for years to come! It was brutal, it was painful, it was torture to look at and that made The Impossible great! It’s that scene with Watts in the end of the movie that makes the word “impossible” stand out because that’s what she did just by surviving. She did the impossible!  And since this story is based on reality and as the performances by Watts and Holland were out of this world (the two other boys were adorable as well), The Impossible is a great movie. But what’s even more amazing is that it was a story about a family, a real story, a story about the strongest survival instinct being amongst not one but each and every one of them.

PS: Here’s one of my favorite scenes where the brothers reunite and as I put this gif set up here I started tearing up. Yes, I almost started to cry again but I guess The Impossible stays with you even think the emotions have disappeared. Plus, how fucking amazing is Holland in this scene – is it too early to call him the next great thing?